The writing process is fascinating and I love it! Do I plan all my characters out before I start to write? Yes! If I didn't, I wouldn't know where the story was going or how to get there. Characters are everything in a story. They motivate, push, pull and determine the outcome whether the story's a romance, mystery or thriller. I plan the lead characters, their motivations and goals, their shortcomings and strengths--then put them in situations that test them. I don't put pen to paper until it's all planned out in my head. The chapter details, I leave until I arrive at that point in the story.

Writing has always been a catharsis, a way of working out ideas, emotions, personal problems. I was creating my own comic books in junior high school and wrote my first novel in high school. I showed them to my sisters and friends and had no clue how to go about getting published. Then life intervened, I worked my way through college and began teaching. Then began a family...well, the rest is history. Is it still a catharsis? Yes, in many ways although now it's more of a cerebral exercise. Gotta stave off that Alzheimer's, y'know. Seriously, my grandmother lived a full life and was mentally sharp until she died at 100. I'm hoping to follow in Grandma Eva's path.

I never have writer's block but I never force myself to come up with an idea. Waiting patiently and keeping busy doing other things helps the internal, creative percolating process. Eventually, the ideas come along with the motivation to put it all down "on paper". Only now, it's sitting time at the word processor.

The research part is the most fun for me. I love doing research! For my first women's fiction novel, a dramedy with a Hispanic heroine, I needed to research the Mexican drug cartels. For that and a couple of climax scenes, my sister, Gloria, and I drove from East Texas to San Antonio, then on down to Laredo, Texas. With more than a little trepidation, we crossed into Nuevo Laredo, two "gringitas" going shopping in this sleepy little bordertown. That was seven years ago--thank God! Now, this bordertown is overrun and terrorized by the Zetas, the paramilitary arm of one of the Mexican drug cartels. Then, it was bad enough but not yet too dangerous. While riding around in a taxi, we saw a pickup loaded with men carrying assault rifles--and they weren't federales, either. They were Los Zetas and had they known I was doing research on them, I'd now be buried in an unmarked grave in the desert somewhere. Truly scary! And stupid! Now I'm a little more cautious about my research, where and how I do it. For the second novel in my Born to Sing

series, Scheming and Dreaming in Los Angeles, I went down to So Cal and did a bit of city hopping (there are over 70 small cities in the greater Los Angeles area) and got a feel for a couple of them. Each one is distinct with its own flavor, socio-economic identity and ethnic makeup. I studied the freeway maps, got a feel for the terrain and the costs of each neighborhood, and talked to people who live down there. I'll be doing the same thing with the sequel to Scheming, Alive in New York City. For me, the research is fun but the writing is challenging!

A necessary part of the writing cycle are good critique partners. I am blessed with two wonderful women who bring a vital, critical eye to my work and are not afraid to tell me what's wrong as well as what's right. I return the favor, our pact being "Be brutally honest but diplomatic."

I love mysteries and thrillers, especially spy thrillers. Authors like Daniel Silva, Brad Thor, Lisa Gardner--I simply devour their books. How I wish I could write like them! I'm working on it... Because I love to read mysteries and thrillers, I've branched out and have written one romantic mystery and one romantic thriller. A Bodyguard of Lies and The Delphi Bloodline, I'm confident, will be coming out in the next two years. These two were especially challenging to write and I've revised them numerous times until I think they're about ready for public consumption. Wish me luck! 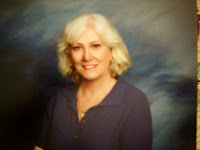 ABOUT THE AUTHOR: Donna Del Oro spent her childhood in two places, Silicon Valley, CA and the countryside of East Texas, as her father tried several job opportunities. Finally settling in Silicon Valley, she grew up in a bilingual, bicultural world--Spanish on her mother's side and English on her father's. Comfortable in both worlds, she decided upon retiring from teaching to write about her Hispanic side. Four women's fiction books resulted and a series about professional singers, their careers and love lives. Retired and devoting much of her abundant free time to exercise, writing, singing and her grandson, Donna has finally reached a point in life that totally satisfies her. Life is good and she has no complaints, just a lot of gratitude.
Posted by Michele-Admin Assistant at 4:00 AM

Hi Donna. You are such a great role model. Teacher, author of both romance and thrillers, singer. And as I recall, former ballroom dancer. What can't you do?

Plus you always have a smile for your friends.

Nice Blog Donna. What an interesting research trip you must have had in Texas and Mexico. I bet there's more stories there than just want showed up in the book.

Donna, what a great blog article. I love learning about how other writers write. So interesting! I admire your ability to plan it all ahead of time in your head.